Over the last few months, throughout our series of English lessons in "Inżynier Budownictwa" monthly, we have managed to cover various topics related to the construction industry. Most of them tackled the issue of occupa- tional health and safety on a construction site including earthworks, concrete and reinforced concrete works, electrical works as well as works at heights. In addition we learned few facts about railway construction, resi- dential housing and bicycle paths. We could also read about superstitions regarding building a house, as well as New Year’s resolutions. The following quiz is a great way to check what you remember from those ten lessons published from September 2016.

Match the statements (6-10) with the relevant ones (A-E) to complete the tips about OHS.

A. They should be dismantled by qualified teams once the concrete has gained the sufficient strength.

B. It should involve tests and measurements of the insulation resistance, continuity of protective cables and earthing resistance.

C. They should be secured with 1.1 m barriers erected at least 1.0 m from the edge.

D. It happens when workers do not use personal protective equipment such as safety belts and harnesses.

E. Hoists, cranes, concrete pumps or containers should be functional and operated by only authorised staff.

F. The compliance with them is supervised by the National Labour Inspectorate.

Choose the odd word out in each of the following groups (11-20):

Complete the sentences below (21-30) with the appropriate words or expressions in correct forms:

One of my New Year’s resolutions was to learn English with "Inżynier Budownictwa”.

29.                 is an electrical tool, equipped with a main switch and necessary electric shock safety devices, used to distribute and control power distribution. 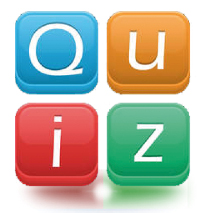 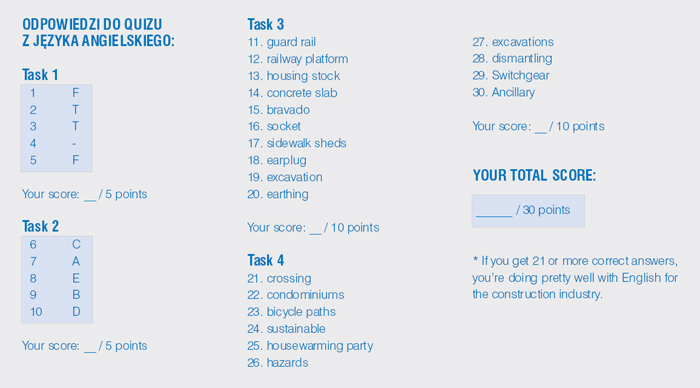 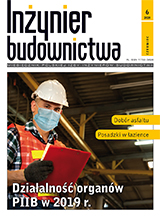